Androids and Robots of Zaoth 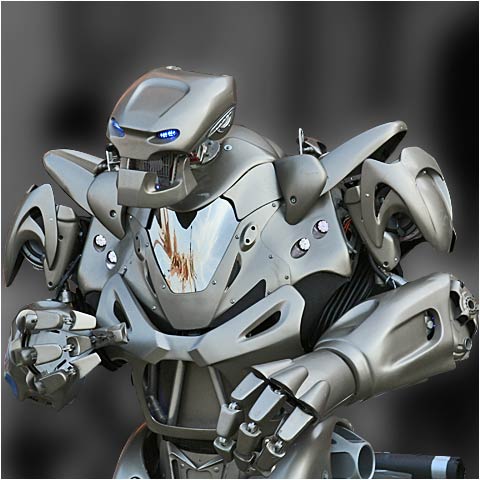 Eons ago, before their attempts at creating life, the Ancient Ones delved into advanced forms of science creating androids and robots to act as servants.  These androids were crafted to serve a variety of purposes the most common of which were as warriors and guardians of their vast complexes.  Today, these androids can still be found within the ruins of the Ancient Ones' cities and keeps.  Many of them remain in programmed slumber, awaiting some sort of triggering to once again rise and protect their long extinct masters' treasures.

In the world of Zaoth there are many ancient ruins holding vast technological and magical treasures.  These ruins are sometimes protected by these androids who awaken when groups of plunderers and adventurers wander into their vicinity.  These androids are triggered in the same fashion as a typical trap might be in a traditional dungeon environment (pressure plates, alarms, etc.)   Below is a table for randomly generating these robotic monstrosities for use within an adventure set in Zaoth.

Special Defenses (roll 50% chance for special defense system) d10:
1 - Force field (+2 bonus to AC, all normal missiles deflect)
2 - Teleportation (Once per day may teleport without fail up to 50' in programmed/known areas)
3 - Gas secretion (Once per day secretes toxic gas.  Roll save vs poison or suffer -2 STR for 1d10 turns)
4 - Increased armor (Harder reinforced armor.  +3 bonus to AC)
5 - Self destruct (If reduced to 0 hit points, self destructs in an explosion dealing 5d6 damage to all opponents within 10' radius)
6 - Heat shield (Added protection from heat/fire based attacks.  Takes only 1/2 damage from these attacks, and if saving throw is required and successful, takes no damage [i.e. fireball spell])
7 -Mirror image (Android has capability to create d6 holographic copies of itself so as to be indistinguishable from its true image.  These act per the Mirror Image spell.)
8 - Reflector field (Attacks made by laser/blaster weapons, and/or spells are reflected back at the shooter/caster)
9 - Flight (Has the ability to fly at will)
10 - GM chooses

As an aside, it should be a given that in addition to the normal special defenses an android/robot may have, they are naturally immune to all sleep, charm, and hold type spells.
Posted by RobChandler at 8:04 PM No comments:

Zaoth orbits around the giant red star Aldebaran.  As the red giant has expanded, Zaoth has experienced drastic changes in its climate and ecology.  The change has been so gradual that the current beings that call Zaoth their home have never known anything different (except for those eldritch beings said to dwell deep beneath the surface of the world.)  To most denizens, Zaoth has always been this way.

The planet itself is mostly a wasteland filled with seemingly endless deserts of barren and prismatic rocks.  What few forests remain are dying slowly as water becomes more and more scarce.  The atmosphere itself is thin, and a traveler from another plane might find it difficult to breathe for extended periods of time, and often find themselves exerted much faster than on their homeworlds.

Spotted throughout the land are ancient cities, mostly fallen into ruin, but still occupied by the various men of the planet.  Some are nomadic, merely using the cities as shelter for a few weeks or months, while some remain, trying to pick up the pieces of civilization.  As to whom, or what built many of these cities, it is mostly a mystery to the men of Zaoth.  Evidence suggests that there was, at one time, a race of superior and refined beings who delved into arcane magics and a high level of technology.  It is said that hidden within the ruins are secrets and treasure beyond comprehension if one is inclined to brave the dangers.

Gaseous marshes and swamps can be found here and there as well as vast mountain ranges whose peaks shimmer and glitter with various colors.  Most of the surface itself is reddish in hue, with an almost rust quality.  Mysterious black crystaline towers can be seen dotted along the landscape, some in ruin, while others still as majestic as they were eons before.

Beyond the dangers of starvation, thirst, and the various creatures of the planet (most of which are extremely vile and dangerous), are pockets of intense gamma ray exposure from holes in the planet's atmosphere.  Extended exposure in these areas can cause horrific mutations, and in many cases, death.

There are, however, certain areas where vegetation and water can be found, and men can live comfortably.  The Valley of Tesk is one such example.  Situated in an isolated valley, this region is home to one of the major underground springs still in existence.  Many more of the civilized races have flocked here, yet the people of this region remain in a constant state of war due to the vast and limited natural resources available.

Covering the north region of the planet is the massive glacier known as the Icy Flats.  The glacier itself is ever expanding at a slow pace and has grown exponentially over the past millennium.  This region, with its harsh year round freezing temperatures is home to the Albino men of Zaoth.  Brutal and barbaric savages who call the wasteland their home.

The Zaoth calendar is effectively non-existent.  Due to the size of Aldebaran, it can take many earth years for the planet to orbit the sun fully.  A Zaoth day is roughly 36 hours with periods of increased darkness in the later part of the full revolution as this is the point at which Zaoth is furthest away from the giant star.

Seasons on Zaoth can last for the equivalent of many earth years, rather than a few months.  Winter is the most brutal of seasons, as the planet already sees generally low temperatures due to the fading heat of the sun.

The planet has 4 orbiting moons.  They are Hastah, Ymrak, Zeruk, and Rylek.  It is said that once in a thousand years the moons align in orbit, and when this happens, it is rumored the eldritch beings wake from their slumber below the surface and wreak havoc on the world.
Posted by RobChandler at 9:50 PM 5 comments:

"These men are not like the men of Earth, or any other place in the cosmos.  Grown from the vats of the ancient ones who traveled the planes, the humans of Zaoth became a much more dangerous breed.  The centuries of evolution of their kind here have proven that they illicit the most cruel and ambitious traits of their race.  With no sense of moral definition, the men of Zaoth spread like a plague on the land exploiting and destroying everything they touched."
- X'amphur Quiggoth, High Archon of L'menth, from "The Histories of Zaoth: Volume III"
Eons ago, when the Ancient Ones still ruled Zaoth, they created creatures similar to humans within magically cultured vats.  Initially their endeavors to create life failed, but after centuries of trial and error they were able to create sentient humans whom they used as servants and builders as well as subjects of other, more vile experiments.  Eventually they were able to create men who could procreate with the women they created allowing them to focus less on culturing vats, thus allowing them to divert their attention to other more malign purposes.  As centuries passed, these men developed their own intelligence and revolted against their masters.  Over a hundred years they fought the Ancient Ones, who were eventually driven to other worlds, or killed by their own creations.
The men and women of Zaoth are not like those of Earth in the fact that they have no moral compass.  In general they are the epitome of the worst traits of Earth men, and are driven by greed, corruption, exploitation, and their own selfish desires.  Many of the races developed their own cultures and cities, while some, such as the albino men of the Icy Flats, retracted into a primitive barbaric state.  Because of their genetic makeup, it is impossible for the races of men to interbreed and procreate with others not of their own race.
The men of Zaoth worship no gods, and as such, have no temples or places of worship.  Many of the races have particular abilities which make them exceptional in certain "classes."  When creating a PC human from Zaoth, roll on the following table to determine the racial sub-type before determining class as each subtype has its own boons.
Roll 1d6
1   Athok - Greenish skin of varying hues, +1 to INT and WIS, -1 to STR and CON.  These men make for exceptional sorcerers giving them 1 extra spell per level
2   Rethtak -  Reddish skin, +1 to STR and CON, -1 to INT and CHR.  These men have one extra set of arms (for a total of 4) allowing them to gain an extra melee attack each round
3   Onyx -  Black and dark grey skin, +1 to DEX and INT, -1 STR and CHR.  Extremely agile, these men gain +10% to both hide in shadows and move silently.  They are known as the best assassins in Zaoth
4   Benax - Blueish hued skin, +1 to DEX and STR, -1 CON and WIS.  These men are exceptional with ranged weapons due to their keen eyesight.  +1 to hit with any ranged weapon
5   Krile -  Purple and violet hued skin, +1 DEX and WIS, -1 STR and INT.  These men make for fierce warriors and trackers.  They may use 2 weapons of the same size in melee without incurring any penalty.
6   Albino - White and pale hued skin, +1 STR and CON, -1 INT and WIS.  These men are savages of the Icy Flats.  They have a +1 to hit with any crude weapon (spear, stone axe, etc.) and use a d12 for hit dice regardless of class.  They lack the ability to be sorcerers.
Other notes on PC men of Zaoth:
Armor: Any or based on class
Classes: Fighter, Sorcerer, Thief, Assassin, Barbarian (only Albino men may be barbarians)
Starting Age: Per OSRIC by class
Starting Gold: Per OSRIC by class. Barbarians start with 2d4x10 gold
Posted by RobChandler at 8:28 AM 2 comments:

The Blighted World of Zaoth Far away from earth, in the Taurus constellation, lies the blighted world of Zaoth.  Its denizens are dangerous, its lands a blighted waste of prismatic deserts, crystaline black towers, and races both horrible and enigmatic.  Woe to he who dares venture here.

This blog will focus on the design and creation of my own homebrew campaign setting for old school variations of the world's greatest fantasy adventure game.  The rules here will be primarily based on OSRIC with additional house rules and particulars to the world of Zaoth within.

You can expect to see maps, unique monsters, classes, geographic descriptions, and more as the blog develops and I flesh out this weird science-fantasy setting.  This world will hearken back to the works of classic pulp fiction authors Edgar Rice Burroughs, Robert E. Howard, Jack Vance, H.P. Lovecraft, and more.
Posted by RobChandler at 8:59 PM 12 comments:

From Around the OSR